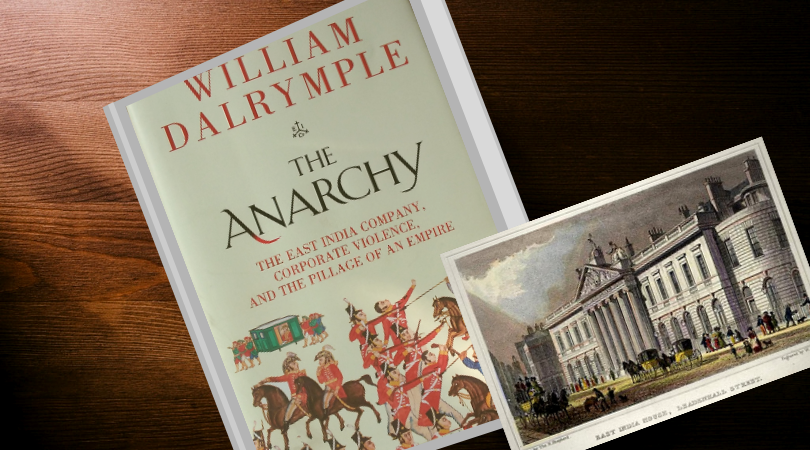 I have never understood the recent trend (a decade or more) of subtitling book titles, and I suspect it’s the publishers’ tactic of trying to boost book sales. But in the case of William Dalrymple’s recent tome, The Anarchy, the subtitle actually does more justice to the subject: The East India Company, Corporate Violence and the Pillage of an Empire.  And this isn’t only because it’s descriptive, it is because the anarchy that Dalrymple refers to covers a much shorter period than the centuries-old Empire building project in India.

While most of the history of the British empire is already known to most of us, it is the way Dalrymple presents it to us in the context of the 21st century that makes reading it worthwhile. At a time when there is much debate around the subject of capitalism itself around the world, it is worth examining how the world’s first and original multinational company conducted itself and its business from the 17th century onwards.

The world’s first multinational company was a strange creation, from the very start. The East India Company, representing the interests of the Crown, was owned by a group of parliamentarians and other buccaneering businessmen, had its own private army, its own currency, and a leviathan empire spread all over the world. Except for the private army and the currency (though Facebook with its planned Libra cryptocurrency would come quite close), the modern multinational company resembles it in many ways, as we shall soon discover through the course of the book. This is one of the most fascinating aspects of the book, evoking the close relationship between business and government, which is why I mentioned it in my blog post on illiberal politics and the alignment of business and government interests.

A lot of the early trading history and the EIC seeking trading rights as well as the patronage of Indian princes, nawabs and kings reads like a story, with anecdotes – including intricate details and minutiae of kings’ courts, the receptions, etc. – all extremely well-researched and presented. The encounters as well as battles are presented with story-telling detail as well. One has to allow for the fact that recording details and minutiae in the documents of those days was perhaps considered recording history. So, when Dalrymple is describing the state of Aliverdi Khan’s health, who suffered from dropsy, or his nephew Siraj’s ruthlessness, you can expect a sense of drama. Here, for example, is an account of an encounter between the EIC and Siraj- u-Daula’s men:

“The EIC factory closed its gates and primed the cannon on the battlements with grapeshot; for several days there was a standoff, with the factory first blockaded then besieged, and the factors divided on whether to offer military resistance with the few troops and limited weaponry they had at hand or to meekly submit to Siraj-ud-Daula…

According to an English eyewitness report, “Upon Mr Watts’ going before the Nabob, with his hands across and a handkerchief wrapt around his wrists, signifying himself his slave and prisoner, he (Siraj) abused him very much. Watts was made to hug the Nawab’s feet, and cry: ‘Tomar Ghulam, tomar ghulam’ – ‘I am your slave, your slave.’”

Nevertheless, the book still manages to maintain its serious tone and focus, and does capture the devious aims, principles and methods employed by the Company in achieving its objectives. And, in doing so, it also manages to paint flesh-and-blood character portraits of the dramatis personae such as Robert Clive, Siraj-u-Daula, Shuja-ud-Daula, Warren Hastings, Shivaji, Tippu Sultan and others.

The book really picks up on its main theme from the sixth chapter onwards: Racked by famine. For that unfortunate episode, the Bengal famine of 1769-70, proved to be the turning point in the EIC’s history. If the first half of the book deals with the EIC’s activities in trading, fortifications, wresting control from the nawabs and princes and power-sharing with the Mughals, the second half deals with the unravelling of all the power and control that the EIC had built up during that time.

Therein lies the cautionary tale for today. The famine of 1769-70 proved to be so devastating for Bengal, its people and the EIC’s finances that it led to British parliamentarians questioning the hitherto unbridled power and authority of the Company for the first time. Although the initial response of EIC to the famine was to maintain revenue, including by raising taxes by 10%, it did take a toll on the Company eventually. EIC was forced to borrow from the Bank of England, but “there were unpaid bills of £ 1.6 million and obligations of over £ 9 million”. These conditions also unfortunately led to the impeachment trial of Warren Hastings who, thanks to a vicious slander campaign by a colleague, Philip Francis, was blamed for mismanaging the Company’s operations.

While telling us all this, Dalrymple also gives us an insight into the differing management styles of Robert Clive and Warren Hastings, a study in contrasts.

And, it was during the course of this impeachment trial as well as enquiry into the Company’s operations, that British Parliament first started to question the policies and methods of the EIC. After all, many MPs had a financial stake in the Company. This was led by Edmund Burke and his now famous four-day speech in Parliament which formed the opening remarks of Hasting’s trial.

This is how the world’s first multinational company came to be regulated, in the first place. It was always tacitly understood to represent the Crown, but was never accountable to it nor to Parliament, since it was never legislated upon. It also brought into question the liabilities of a joint-stock corporation which, according to Dalrymple, was a brilliant Tudor invention:

“The idea of a joint stock company was one of Tudor England’s most brilliant and revolutionary innovations. The spark of the idea sprang from the flint of the medieval craft guilds, where merchants and manufacturers could pool their resources to undertake ventures none could afford to make individually. But the crucial difference in a joint stock company was that the latter could bring in passive investors who had the cash to subscribe to a project but were not themselves involved in the running of it. Such shares could be bought and sold by anyone, and their price could rise or fall depending on demand and the success of the venture.”

Unfortunately, as we have all seen once too often, when companies renege on their commitments, or are forced into bankruptcy, it is the common taxpayer and the government who have to come to the rescue. And just like the big banks who were too big to fail in 2008, the EIC was simply too big to fail. Not just in financial terms, but in what it had come to represent: Empire itself. The competing demands of building their military as well as managing the revenue in the face of famine was too much for even the mightiest corporation and proved to be their undoing.

As Dalrymple notes in the Epilogue to the book;

“What Burke feared the East India Company would do to England in 1772 – potentially drag the government ‘down into an unfathomable abyss’ – actually happened in Iceland in 2008-11, when the systemic collapse of all three of the country’s major privately owned commercial banks brought the country to the brink of bankruptcy. In the twenty-first century, a powerful corporation can still overwhelm or subvert a state every bit as effectively as the East India Company did in Bengal in the eighteenth.”

Indeed. In the US particularly, a company’s financial muscle is often accompanied by extraordinary lobbying power, which is enough to subvert any system. Which is why I wrote on the nexus between business and government as well as shared my podcast on Stakeholder Capitalism. It will take more than platitudes to make the latter work.

There is no disputing that business, as the rest of society, needs the sensible regulating framework of government and democratic institutions to work. Otherwise, “animal spirits” can sometimes quickly turn into rapacious appetites.

The picture at the start of this post features an image of a drawing of East India House on Leadenhall Street, London, by Thomas Shepherd, 1828, courtesy Wikimedia Commons