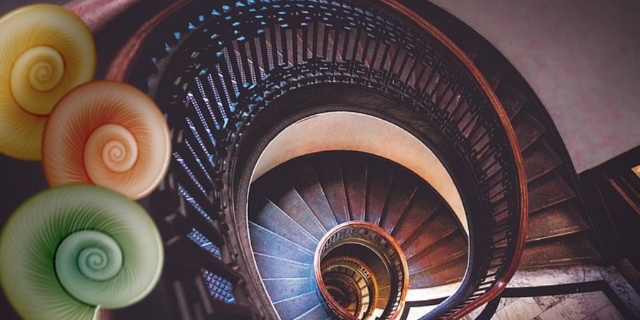 Having finished reading two of Italo Calvino’s books in quick succession, I have to say that I have been transported to a magical land. Invisible Cities and If on a Winter’s Night a Traveller are studies in surrealism that leave you suspended in space and time.

Calvino is known to be a master story-teller, but the way he weaves his tales, picking up threads from different realms in space and time and creating a cohesive whole, is to be marveled at. He is amazingly inventive which, you as a reader, can tell from the imaginative construct at the very outset.

Invisible Cities, for example, is a conversation between Marco Polo and Kublai Khan, or rather a series of several conversations over time. If that alone is not unusual or inventive enough, add Italo Calvino’s (or Marco Polo’s) amazing descriptions of cities he has visited on his travels that he narrates to Kublai Khan, each more fascinating than the other. Sample this:

“When a man rides a long time through wild regions, he feels the desire for a city. Finally, he comes to Isidora, a city where the buildings have spiral staircases, encrusted with spiral seashells, where perfect telescopes and violins are made, where the foreigner hesitating between two women always encounters a third… Isidora, therefore, is the city of his dreams: with one difference. The dreamed-of city contained him as a young man; he arrives at Isidora in his old age. In the square, there is the wall where old men sit and watch the young go by; he is seated in a row with them. Desires are already memories.”

You can tell that he is describing a city in Italy, with the reference to telescopes and violins. Galileo and the Stradivarius immediately come to mind. Or this, from the very next chapter:

‘There are two ways of describing the city of Dorothea: you can say that four aluminum towers rise from its walls, flanking seven gates with spring-operated drawbridges that span the moat whose water feeds four green canals which cross the city, dividing it into nine quarters, each with three hundred houses and seven hundred chimneys…. Or else you can say, like the camel driver who took me there: “I arrived here first in my youth, one morning, many people were hurrying along the streets toward the market, the women had fine teeth and looked you straight in the eye, three soldiers on a platform played the trumpet and all around wheels turned and coloured banners fluttered in the wind. Before then, I had only known the desert and the caravan routes. In the years that followed, my eyes turned to contemplate the desert expanses and the caravan routes; but now I know this path is only one of the many that opened before me on that morning in Dorothea.”’

In this fashion, Marco Polo opens the eyes of Kublai Khan to numerous cities and their unique and distinguishing features. And as the book progresses, we discover that he is all the while attempting to make the great emperor realise the limits of his ambition and greed, his quest to conquer foreign lands so much like a mirage.

Marco Polo’s (or Italo Calvino’s) descriptions of cities as holders of memories, desires and dreams and the constant interplay between youth and old age makes Kublai Khan uncomfortable. At one point in the conversation, he stops Marco Polo to ask:

‘At this point, Kublai Khan interrupted him or imagined interrupting him, or Marco Polo imagined himself interrupted, with a question such as: “You advance always with your head turned back?” or “Is what you see always behind you?” or rather, “Does your journey take place only in the past?”’

Of course, as Italo Calvino informs us, this was so that “Marco Polo could explain that what he sought was always something lying ahead, and even if it was a matter of the past, it was a past that changed gradually as he advanced on his journey, because the traveller’s past changes according to the route he has followed: not the immediate past, that is by which each day that goes by adds a day, but the more remote past.”

And through this labyrinthine story of cities encountered, we discover that the great emperor is quite shallow, vain and capricious and that Marco Polo is the wise one making the Emperor see the futility of many of his wishes and whims. We also come to realise that the cities Marco Polo is describing all along, is actually only one city. Venice.

One of the most profound passages in the book is when Marco Polo describes a bridge to Kublai Khan:

“But which is the stone that supports the bridge?” Kublai Khan asks.

“The bridge is not supported by one stone or another,” Marco answers, “but by the line of the arch that they form.”

Kublai Khan remains silent, reflecting. Then, he adds: “Why do you speak to me of the stones? It is only the arch that matters to me.”

Polo answers: “Without stones, there is no arch.”’

It is Italo Calvino’s ability to conjure up fantastical images of cities, of Venice itself in countless ways, that makes the journey worthwhile. And if Invisible Cities is a journey through numerous cities in one city, If on a Winter’s Night a Traveller is a reader’s journey through several books in the quest to read one! It is quite the opposite of Invisible Cities in construct: one book leads to another and another and another! Indeed, the entire book is about the experience of reading. More accurately, the experience of a character reading a book leads him and us on a never-ending journey of several books, each discovered quite by accident.

And it is these remarkable accidents that are signs of Italo Calvino’s inventiveness. For example, the reader’s discovery of misnumbered pages leads him to discover an entirely new book. More accurately, it turns out that the book that he and many others are reading, actually got mixed up through a binding error!

Or, take the book that he ends up discussing with a lady, Ludmilla, who suggests a visit to a professor of Cimmerian to clarify matters. Before long, Cimmerian gets confused with Cimbrian and the reader is off on yet another wild goose chase. Clarify means he suggests yet another book as the authentic authority on the subject. And so the quest goes on.

It is these chance encounters with new characters in If on a Winter’s Night a Traveller and with new stories and books that make the entire journey hilarious and delightful. The way these new books and characters are introduced also make for great storytelling.

For example, on the way to meeting the professor at the University, the reader meets a man, Irnerio, who not only knows that he is waiting for Ludmilla, but offers to take him to Professor Uzzi-Tuzzi. While walking together, the reader asks Irnerio what he reads. To which Irnerio replies:

“Nothing. I’ve become so accustomed to not reading that I don’t even read what appears before my eyes. It’s not easy: they teach us to read as children, and for the rest of our lives we remain the slaves of all the written stuff they fling in front of us. I may have had to make some effort myself, at first, to learn not to read, but now it comes quite naturally to me. The secret is not refusing to look at the written words. On the contrary, you must look at them, intensely, until they disappear.”

If on a Winter’s Night a Traveller is full of thoughts and opinions expressing skepticism, even cynicism, about reading, books, publishing, authorship, etc, that are delightful ways in which Calvino punctuates his story. A letter that a publisher, Cavedagna, shows the reader as a reply from a translator who has passed off a translated work as his own, says:

“What does the name of an author on the jacket matter? Let us move forward in thought to three thousand years from now. Who knows which books from our period will be saved, and who knows which authors’ names will be remembered? Some books will remain famous, but will be considered anonymous works, as for us the epic of Gilgamesh; other authors’ names will survive, as was the case with Socrates; or perhaps all the surviving books will be attributed to a single, mysterious author, like Homer.”

And so, from If on a winter’s night a traveller, we go to Outside the town of Malbork and then to Looking down in the gathering shadow, etc. We travel through many books belonging to different genres, all for the love of reading, and the Everyman reader’s search for knowledge.

Speaking of books and reading, I have personal grief to share here. I recently lost almost all my books that were perched in my bedroom loft at my parents’ place in Goa. These were books I had lovingly bought and read over my life and many were gifts; they had travelled with me from Delhi to Chennai to Goa to Delhi again and then back to Goa. They comprised fiction as well as non-fiction and many were also related to my work (advertising and brand communications). Since the flat is full of my father’s books and there is no place for mine, we had left them in cardboard cartons in the loft where they had spent 11 years.

I was horrified to discover that in that time they had been almost completely eaten up by termites, the cartons bursting at the corners, as if the contents had swelled with all the gorging. They were destroyed into tatters of grey, ashen material that the pest control people found inside. In some places, pages of the books had been turned into grey concrete-like blocks, that was simply too ghastly to even look at.

My heart sank at the thought that this is what an entire lifetime of reading had been reduced to. How much better it would have been if I could have given the books away to a school or a college library instead. Unfortunately, that wasn’t possible as my parents know only too well, from years of trying to give away some of their books in Goa. It appears very few people read in Goa, and used books, even less so.

I felt like a part of me had been torn and eaten away. Coming close on the heels of my losing around a decade of my work – when notebooks of my thoughts and ideas on brands were chewed up by termites that had attacked my writing desk – this was more than I could bear. A loss I will be grieving, for long.

It seems appropriate then, for me to end with this introductory passage from Italo Calvino’s Invisible Cities:

“It is the desperate moment when we discover that this empire, which had seemed to us the sum of all wonders, is an endless, formless ruin, that corruption’s gangrene has spread too far to be healed by our scepter, that the triumph over enemy sovereigns has made us the heirs of their long undoing. Only in Marco Polo’s accounts was Kublai Khan able to discern, through the walls and towers destined to crumble, the tracery of a pattern so subtle it could escape the termites’ gnawing.”

1 thought on “The Magical Surrealism of Italo Calvino”