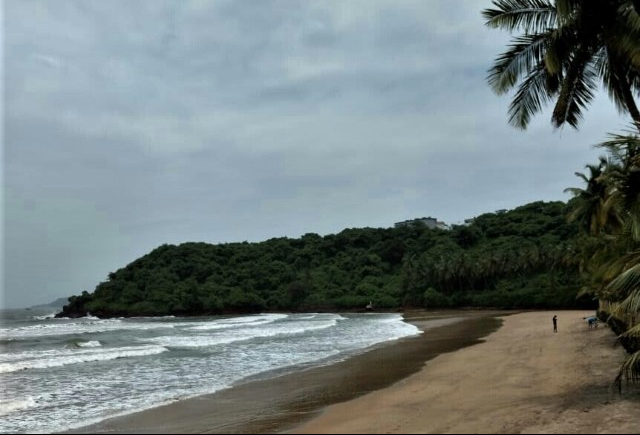 The electricity utility companies will down their systems for a day of pre-monsoon maintenance, as they will warn you. You can be sure that power outages will still be a feature of the monsoon. Telephone lines will go kaput, at the sound of the first rumble of thunder and lightning. Trees get uprooted with just the first pre-monsoon showers. It’s all part of life when it rains in Goa.

And then, on the appointed day in June (of which we have advance notice, thanks to more modern and accurate met forecasts), you turn to the skies. To the horizon, more precisely, if you’re fortunate enough to have it within your field of vision. A thick band of dark grey clouds first makes its appearance, all along the horizon, usually with the appropriate sound effects of rumbling thunder. You can’t help but just watch with your eyes fixed on the band of grey as it advances. Within an hour or less, it would have swept over you, covering the entire sky with grey and the entire earth with cool, cool rain.

The sky of grey will stay for the next four months right up to end September (some years even end October), rarely if ever letting the sun in. I have witnessed this phenomenon in Goa over several years, but it never ceases to amaze me. Yet, monsoon grey skies are not perceived as a bleak or dismal time anywhere in India. In fact, the Western concept of “a rainy day” or a “rain check” would be quite out of place here. On the contrary, the monsoon is welcomed and prayed for. It is a period of rejuvenation, of earthly transformations and of plenitude.

You can see, smell, hear, feel and taste it all around you. The monsoon is a season for the senses. Rivers swell, ponds and lakes fill up, waterfalls gush forth, streets turn into tiny rivulets. The sea in Goa turns into a sheet of nondescript grey, until the white of the foamy waves dance and leap high into the air, giving you a glimpse of just how much the ocean rages. The red laterite soil in Goa almost magically bursts into lush green, with whatever foliage it can grow and sustain. Trees often sprout tiny tendrils of Ovidian creepers and vines on them and when the monsoon ends months later, you have festooned greenery outside your balcony to take you to winter which, as I had written in a previous post, is really springtime in Goa.

The monsoon usually begins in Goa with the Catholic festival of Sao Joao, which is a Feast of John, the Baptist. It is when Goan Catholic families, villages and entire communities gather for a feast and merrymaking which includes the making of kopels, which are colourful headgear made with flowers, fruits, leaves and twigs. The festival also includes the ritual of jumping into wells!

Monsoon is a time for growth in India. The Indian economy depends on it, even though the composition has changed from agriculture-led to a services-led one. Agriculture might contribute only 17% to the Indian economy today but it sustains the livelihoods of 55% of the population who still reside in villages across the country. For the past couple of decades, the monsoon has also come to mean a time of prosperity and increased consumption, thanks to the booming growth that India’s rural economy has witnessed. I know you’re thinking “What about all the thousands of farmers committing suicide?”, and that is a story of an agrarian sector that has been starved of any real or meaningful reform and one that needs serious and urgent attention.

In Goa, it almost never stops pouring in the monsoon. If the rain ever takes a break to let a little sunshine through, it is nothing more than a pit-stop. And yet, it is the time of year when you are likely to encounter the unusual sight of youngsters playing soccer in muddy, slushy football fields, reveling in the sport, the mud and the rain. It is also when you will spot most two-wheeler riders on their bikes or scooters looking like they just rode out of the film, Matrix. Dressed in their long, flowing black raincoats fluttering and billowing in the wind, shiny wet with rain, and their black galoshes, to boot, they are indeed dressed to brave the elements. Distances can be quite formidable in Goa and with public transport being what it is, many people commute in private vehicles to work, crossing at least one, if not two river valleys, along the way. In other words, the Goa monsoon is not for the faint-hearted.

The monsoon also strikes me as a time that brings everything, all of life perhaps, into sharper relief. The intensity and fury of it is such that it washes the air clean and colours become deeper and more vivid, even if the view through your blurry window pane is, well, blurry and rainy. There is a time for the rain to pour and for the birds to sing; the two can never go together. These days, the patter of rain on the leaves of the trees outside my room windows blends with the patter on the corrugated metal roofing of our apartment garage below, producing a strange sound somewhat akin to kettle drums. It almost always starts with sharper, harder beats that then soften into a gentle drumroll that just goes on and on. Too bad if you happen to be listening to music as I am right now, as I write this. You just have to turn up the volume, if you want Schubert’s violin piece to drown out the rain.

The smell of wet earth and the flowers on the trees, wafts into your home. It then mingles with the aroma of whatever might be cooking, or the fragrance of your freshly shampooed hair, or the smell of incense sticks, if you’re the religious type, and this mélange of aromas hangs in the dark, dank air. Makes you much more aware of your olfactory senses than at any other time of the year. I also say dark, because it is so overcast outside that you need the lights on inside the flat for much of the day.

Oh, there are other ways – and some not so pleasant – in which the monsoon helps put life into sharper relief. It accentuates the contrast between the rich and the poor, in ways most of us would rather not think about. While it pours in some parts of India, it could mean drought in other parts and devastating floods too in some parts, as happened in Kerala last year. The young and the old respond to the monsoon rain differently. While the young would love to rush out and have a splash-about, the old will always be there to warn them of catching a chill and what have you. The elderly meanwhile can’t stop talking about their flu and their aches and pains. Many a time, my aged mother will wake up from her usual afternoon nap and wonder whether it is morning already, since it is so dark outside. The monsoon plays tricks on you and to outwit her, you have to think ahead.

In this sense, the monsoon isn’t a season just for the senses. It helps to also keep your wits about you. In fact, the monsoon strikes me as the time when nature makes man most aware of his limits. We are always happy to watch the rain through the shelter of a window or from under our umbrellas as we dash in or out of our cars. As we grow older, we also step out gingerly in the rain, we never simply skip out carelessly as we did in our salad days. In Goa, this is even truer since pavements and driveways get covered in moss and lichen, in no time at all. The monsoon is drippy, slippery business.

At no other time of year, do we also have to think so much about stepping out, whether to work or to get some shopping done. In Goa, if the rain subsides just a little, it’s time to grab your umbrella and head out. If you wait for the sun to make its appearance, you could be waiting all day, probably several days. And then, you always have to be in water-proof footwear, because there is no way to avoid stepping into those large puddles. In India’s larger cities like Mumbai, for example, people wade though water-logged streets during the monsoon. I marvel at them each time I have to step out to the grocery store nearby in Goa, and I have to negotiate little rivulets that stream into large puddles at the end of the street. Fortunately, Goa is hilly terrain and there is no place for the rainwater to stand still, all of it runs down the sides of streets and vanishes into the earth somewhere. The next time you walk down the same street, you might see wildflowers growing by the sides of the road.

The only people who have to wait it out for the monsoon to end are Goa’s fisherfolk and tourists who are avid swimmers. A monsoon fishing ban goes into effect each year on June 1, as I had written in my post on my drive to Jacinta Island recently. The monsoon is also a lean season for tourism, which is such a pity because it is when Goa is most beautiful. If you have only seen Goa when it doesn’t rain, you really haven’t experienced Goa. When she metamorphs from a sunny, cheerful coastal paradise into a verdant and wildly melancholic thanksgiving prayer.

Meanwhile, I leave you with a few watercolour impressions…