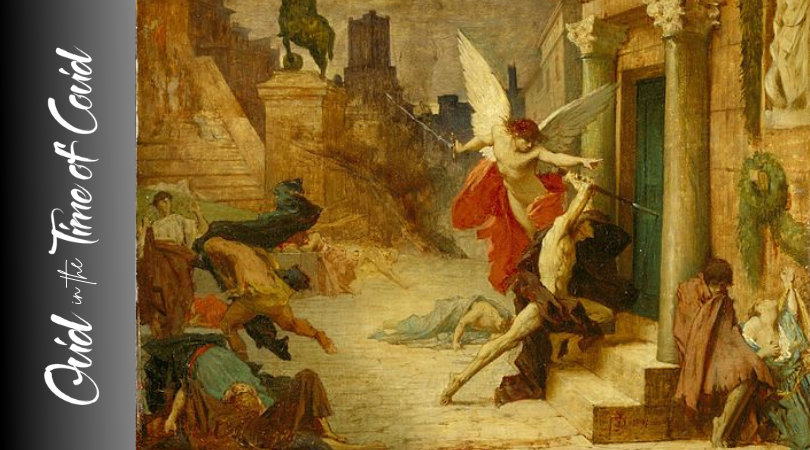 Hello readers. In what is the last of my Ovid in the Time of Covid blog posts, I wish to focus on looking ahead at the time of change. The Covid-19 pandemic is still in our midst, and despite the efforts of the medical and scientific community, it is mutating and spreading ever faster.

The Omicron variant is the latest challenge to our efforts in controlling the pandemic and too little is yet known about it. In the weeks and months ahead, we will be better equipped to fight it, but we must also be prepared for changes in the way we live, work, and interact with each other. Just as the world was beginning to emerge from lockdowns and ready to go back to work and the old life, we are being forced to scurry indoors and stay at home again.

In this last edition of Ovid in the Time of Covid, I use the story of the plague of Aegina from Ovid’s Metamorphoses as inspiration. In it, Cephalus recounts to Aecus and the people of Aegina how the plague ravaged the land and destroyed its population until ants transformed into people (the Myrmidons) in order to save it.

I hope we will heed the signs and look at the positive changes that might indeed emerge from this pandemic as well.

And so it was that two years went by

With the pandemic showing little signs

Of slowing, but raging on high

Past the ever-watchful eyes of science

It almost seemed to cock a snook at them

Saying catch me if you can

Oblivious to all the mayhem

It had already caused and fanned.

The wrath of Juno smote the isle that bears

Her hated Rival’s name. While yet the ill

Seemed such as man might cope with, nor its cause

Was known, with all resource of healing art

We met it; but its deadly force o’erpowered

All skill, and baffled Medicine fled the field.

The story of the plague of Aegina from Ovid’s Metamorphoses, Book VII, Lines 645-651

We might soon run out of letters in our lexicon

As the coronavirus dares us

Delta and now, the Omicron

How many more aliases will it take

For us to find a proven cure?

How many more disguises can it make

Before we call it out for sure?

Two years of this never-ending ordeal

We can count them simply as 730 days

Or 300 million worldwide as ill as they feel

And over 5 million deaths

Whichever way one looks at it

It is laying too many lives to waste

We can’t choose to ignore it

Act, and we can never be accused of doing so in haste.

Gave licence to the burning thirst that raged

Within them: prostrate by the founts and streams

Or round the wells they grovelled, swilling Death

In greedy draughts, and, impotent to rise,

Died in the wave they drank, that not, even so

The story of the plague of Aegina from Ovid’s Metamorphoses, Book VII, Lines 692-699

Medicines, they’re being invented every day

The vaccines too are having their effect

However, too few are making their way

To the poorest people to make any impact

Africa is once again the continent

That the world is forgetting to include

In the vaccination footprint

And we know the results of that can be rude.

In a globalized world, it takes nothing

For a virus to travel the world

And everyone in its path, it is infecting

Spreads it to everyone else they spoke to, or heard

Right now, it is believed that Omicron

If Africa is where it came from

Should vaccine inequity be permissible?

The new-born subjects hailed their King! To Jove,

Due thanks I paid; —my desolate town, my fields

Untilled, were stocked afresh: —and Myrmidons,

In memory of their origin, I named

The race. Thyself hast marked their port: —they keep

The habits of their birth, a frugal tribe,

Inured to toil, that wastes not what it wins,

But stores it, provident of future need.

The story of the plague of Aegina from Ovid’s Metamorphoses, Book VII, Lines 795-802

We too need myrmidons among us

Who will step forth and endeavour

Through care and thoughtfulness

To spread the benefits of medicine

Equally across the world

For each plague and pandemic has its lesson

To teach and to unfurl.