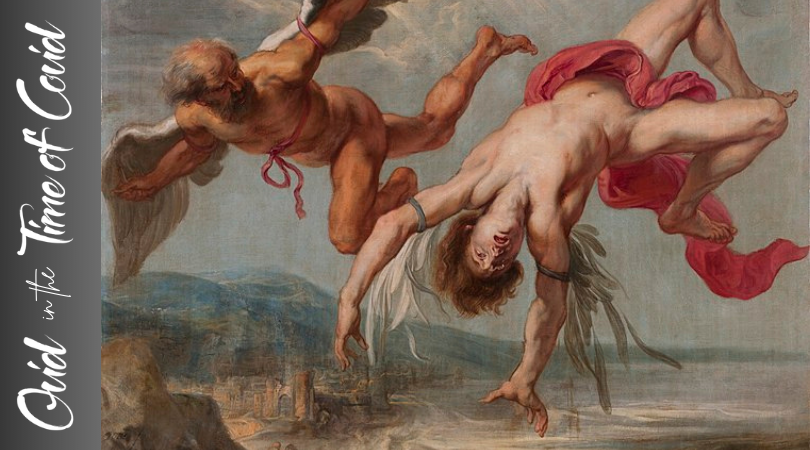 As the Covid-19 pandemic continues to rage around the world and millions continue to die, its effects on different sections of society are widely different. And even as vaccines roll out, access to them and the speed of vaccination programmes too vary widely across the world.

Meanwhile, the economic impacts of the pandemic are making their presence felt as well, with soaring stock-markets – thanks to all the liquidity pumped in by central banks and governments – making the rich even wealthier and the poor losing their livelihoods.

In this edition of Ovid in the Time of Covid, I wish to refer to the story of Icarus from Ovid’s Metamorphoses, in which he is warned not to fly too high, even if there appears to be no such cautionary tale for the world’s plutocrats.

‘Tis been over a year now that

The Covid-19 virus has ravaged the world

Laying everyone low and flat

In its path, through which it whirled

Entire cities were forced into lockdown

Not once, not twice, but time and again

The poor were forced out of job and town

While the rich it seems had plenty to gain.

To be free and roam wherever they pleased

In the markets the rich found their flight

And they wove their dreams of golden fleece

Consoled themselves with ditties

That others thought was day-dreaming.

Too long, and yearning for his native shores,

The Sea in Crete held prisoner. “Land and wave”

He cried, ” deny me way! But Heaven above

Lies open! Heaven shall bear me home! All else

The story of Icarus in Ovid’s Metamorphoses Book VIII, Lines 209-214

The rich worked from home, or wherever they wished

They lived their lives on the internet.

The poor, whether they farmed or they fished

Or worked in factories, you could always bet

Had no choice but to get to work

To earn their livelihoods

If they were lucky to keep their work

And look after their broods.

And that is not all that they suffered

For their employers were forced to down shutters

If not because of a lockdown, one heard

Then because there were no customers.

Many were at the mercy of bosses

And their plans of staying open

Who, considering they were looking at losses,

Were probably wondering when.

So spake he, and to arts unheard-of yet,

Passing the force of Nature, bent his thought;

And wings he framed, from short to longer quill

With gradual slope expanding, – as the Swan

Fits to his rustic pipe the unequal reeds, —

With thread the longer binding and with wax

The shorter, to such arch, as curves the wings

The story of Icarus in Ovid’s Metamorphoses, Book VIII, Lines 215-222

The wealthy and privileged stayed home

Cocooned in their nests, freshly feathered

With the spoils of the stock-market boom

Wondering when more would come their way, not whether.

They made plans for their next generation scions

Not realizing that consumer demand of days halcyon

Came from people working in their factories.

With their brilliance, and delighted over the world’s first Covid vaccines,

But over the next few weeks, what unfurled

At the rate that we first projected

And we can’t send any to other shores

Until our own are fully protected.

Then he taught the boy

Their use: and “Midway keep thy course,” he said

The damps will clog thy pinions, or, too high,

The heat relax them. Midway hold thy flight,

Not dare too near to soar where Helice

Shines dangerous, or Bootes, or the sword

That decks Orion’s glittering belt. By mine

The story of Icarus in Ovid’s Metamorphoses, Book VIII, Lines 230-238

While rich ones are flying full-steam ahead

To protect their elderly and frail by all means

Poor, coloured people, probably not yet.

India has billions at home to inoculate

And vaccines for the world galore

The world’s richest country is in such a state

Stars and stripes, they don’t mean much anymore.

The featured image at the start of this post is of the painting, The Flight of Icarus, by Jacob Peter Gowy (1635-37) from Wikimedia Commons