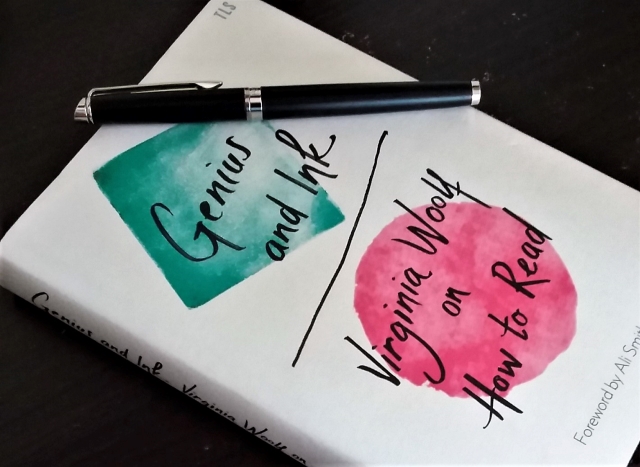 It comprises essays mostly on British authors – save for Henry James and Montaigne – including Joseph Conrad, who most readers would consider British. The first thing that struck me about this book was her wonderful quickness of mind and perceptive quality, which one ought to expect of Virginia Woolf. Even though this is a compilation of her criticism and essays on writers, she brings those same qualities to bear on her understanding and appreciation of the authors and their works. That doesn’t mean she is quick to jump to conclusions or praise them. Quite the contrary.

If there are a couple of aspects that stood out for me as a reader, they are that first, she attempts to read and understand authors as if she was distilling their books from their lives, from their childhood days, from their immediate surroundings, from the lives they led, from their personalities, as if these books were somehow, autobiographical. Of course, they all weren’t, but that is how Woolf approaches books and writers, it appears.

She clearly seeks a connection between what authors wrote and the lives they led. She justifies this way of reading in many an essay in the book. For example, in an essay on Charlotte Brontë, she writes about how it is possible to write anything new about a writer who is already part of the educated person’s consciousness:

“But there is one peculiarity which real works of art possess in common. At each fresh reading one notices some change in them, as if the sap of life ran in their leaves, and with skies and plants they had the power to alter their shape and colour from season to season. To write down one’s impressions of Hamlet as one reads it, year after year, would be virtually to record one’s own autobiography, for as we know more of life, so Shakespeare comments upon what we know. In their degree, the novels of Charlotte Brontë must be placed within the same class of living and changing creations, which so far as we can guess, will serve a generation yet unborn with a glass in which to measure its varying stature.”

You can see that she is clearly making a case for each reading of a book adding to the reader’s experience and becoming the reader’s autobiography, and by a transposition that she is perhaps not conscious of, she is also suggesting that the authors’ works are a reflection of their lives. As is quite evident in this passage, just a couple of pages later, about Jane Eyre:

“There are two reasons for this astonishing closeness and sense of personality – that she is herself the heroine of her novels, and (if we may divide people into those who think and those who feel) that she is primarily the recorder of feelings and not of thoughts.”

I never thought of books as records of thoughts or feelings, or of them as distinct from each other when reading, but always as thoughts and feelings carried and swept ahead in a tale of larger experience through the sheer force of its characters’ actions and changing circumstances. So, does Virginia Woolf think that records of feelings are always autobiographical?

Not quite a fine distinction as that. Because when you get to her essay on George Eliot, Virginia Woolf gives us a good glimpse of the struggle that was George Eliot’s life. From the time she was a child, the grand-daughter of a carpenter, whose father rose to the middle class, to the time she raised funds to restore a church and then educated herself in the culture and ways of the world by sheer force of ambition. Here again, Woolf attempts to draw parallels between George Eliot’s own life and her books. She acknowledges George Eliot’s capacity for thinking when she writes, ‘She read everything. Her astonishing intellectual vitality had triumphed. Youth was over, but youth had been full of suffering.’

However, in the same essay, she also writes,

“In fiction where so much of personality is revealed, the absence of charm is a great lack; and her critics, who have been, of course, of the opposite sex have resented, half-consciously perhaps, her deficiency in a quality which is held to be supremely desirable in women. George Eliot was not charming; she was not strongly feminine; she had none of those eccentricities and inequalities of temper which give to so many artists the endearing simplicity of children.”

Thoughts or feelings, Virginia Woolf believes that a writer’s writing reflects their lives and personalities. Consider the essay on Montaigne. Here too, she makes frequent connections between Montaigne’s life, world-view and what he wrote about. From his love for Paris, the high company he kept and mixed with, his father’s regard for such men, Woolf zooms in to Montaigne’s own reading and wisdom to pick out the strands of his thought, which was always about sticking to the middle path and observing oneself in order to understand the human soul. No fiction here, no need for charm and personality and yet, Montaigne, the thinker, is also set against the background of his own life in order to appreciate and understand him better.

One doesn’t mind any of this because Virginia Woolf gets under the skin of authors and books she is writing about, and she writes with such sensitivity that it allows us a better understanding of these authors as real, flesh-and-blood people, not heroes to place on pedestals.

It does beg the larger question, though: should art imitate life, or should it draw on reserves from other realms. Imagined worlds, for instance.

That brings me to my other observation about Genius and Ink. This book of compact essays also contains a few pieces on reading books in a more general sense. Hours in a Library, On Re-reading Novels and How it Strikes a Contemporary are essays that each, in its own way, deals with weighing the burden of the past with the creations of today. Why we prefer to read contemporary books over classics, why classics are important and the value of literary criticism itself in our lives.

Ironically, while Woolf writes about the great numbers of contemporary writers at the time writing very different kind of books in a clear break from the tradition of the past, she also laments the lack of great literary critics, the likes of John Dryden, Samuel Johnson, Coleridge and Matthew Arnold.

And if you think that Virginia Woolf is clearly on the side of contemporary writers, dealing with issues quite different from those of the past, she is also in favour of reading and knowing the classics. Because, as she says, there we will always find truths, certainty and knowledge.

Virginia Woolf believes in reading widely and reading well. As she writes,

“It is necessary to hold one’s own against someone who has adopted Pope, let us say, instead of Sir Thomas Browne, for a hero, we conceive a deep affection for these men, and feel that we know them not as other people know them, but privately by ourselves. We are fighting under their leadership, and almost in the light of their eyes.”

There, we have it. Reading is an intellectual activity for Virginia Woolf and knowing authors is where it all begins.